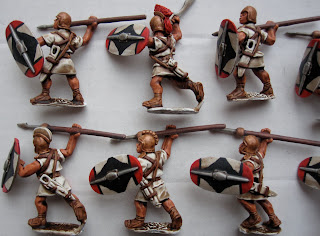 I've been working on another unit of 12 foot - this time Spanish Scutari, making the most of the light we had up North today. The shot above shows a photo of the first 6. They have been dipped AND matte varnished (my first unit to receive the complete treatment) and they look great. The varnish makes them look almost cartoon-like but they look a lot better now than they did before. 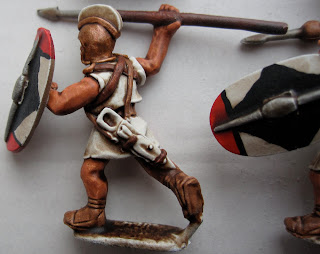 This is a close-up of one of the figures after the varnish had been applied. Not shiny at all!
I had originally intended these Spanish troops to form part of the auxiliary section of my core 1000pt Roman army but I changed my mind, opting instead for some raw recruits. These Spanish troops (available from 1st Corps) offer great flexibility and could be used with most armies across the Mediterranean as an infantry option. I had intended to base them individually using GW style bases but have instead decided to base them on 60mm square bases - 6 to a base. 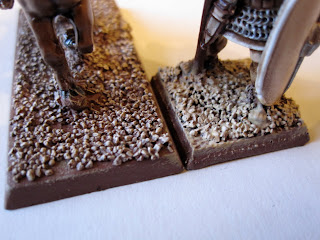 Today's attempt (left) with an earlier attempt at basing (right).
I also had another go at basing, this time with much greater success! The stones on today's attempt look almost real. This is only my second attempt at 'dry-brushing' and I think it went quite well. I wrote a post about my first attempt with you can read here.
All photos are clickable. Feel free to leave thoughts and suggestions.
Posted by Consul at 4:33 pm

They look good. I keep intending to try "dipping" some figures, but keep procrastinating and continue painting my usual way.

Do you brush it on or do you physically dip the figures in? (I've read of people doing it both ways.)

Yeah nice Consul, I really like the colour scheme you have chosen, feels very ancient spanish.

Zero - I highly recommend the dipping technique, atleast try it! Although it is rather expensive at £17 at pot! These particular figures were just dipped straight into the tin but more recently i've been painting on the dip with a brush.

Actually 'dipping' the miniature can leave odd looking brown stains in funny places when you varnish but using a brush is much more controlled. I have to admit - i've had mixed results with the brushing. It seems to vary depending on the quality of the sculpt. Some Perry and Musketeer miniatures don't have particularly angular or detailed faces and that doesn't really benefit the 'dip' technique which requires a better quality, more expressive sculpt. But that's just my opinion.

The brushing technique gives better results on clothes though, without a doubt!

You really need the Army Painter matte varnish as this gives the best results.

I don't highlight after applying the dip, I just paint, dip then varnish.

Extraordinarii - Thank you very much! I did some research for the shields and settled on that design. It should have a curly pattern in the white bits but I daren't paint it in!

P.S. Zero - I'm not saying Perry sculpts are poor quality, but they rely on better skilled painters - ones who will take the time to actually paint in features using the conventional shading technique, features that aren't necessarily on the sculpt.

They look great, Consul! I hope to do a Spanish unit later this year, very versatile troops. Love the shields.

I've been experimenting tonight with washes of ink diluted in Johnson's Klear. This gives a very similar result to the dips, but is cheap as chips and very easy to use. You can buy the Klear at Waitrose, they use it as a floor protection.

They look really good and the 'dip' looks just right. Seeing your figures I am tempted to try the army painter on my Carthaginians but I started these a few years ago attempting the Foundry 3-shade system and I'm not sure if they would blend in. Looking forward to the next progress report.

Excellent. I have a load of crusader Spanish I bought as a pre-release deal and you might have persuaded me to look them out. A very nice colour scheme!

Stryker - I have a few figures I've bought over the last year or so which have used the 3 colour technique and whilst they look good side by side as seperate units, I wouldn't want to combine them. Perhaps you could do all of one troop type using the army painter - perhaps just the skirmishers or something? It's worth a try using the dip technique but it isn't for everyone. I'll post up later today with a look at my early painting work from years ago...

Legatus - welcome back to the blogging world! I've not seen you around recently. The Spanish are actually quite fun to paint. Normally they'd have more varied uniforms but because I'm using them post-Punic Wars I would imagine them to be a little more uniformed. If you want I could post up some of the shield designs on the blog? Let me know.

Yes - these are very nicely painted. Great work on the shields. That is the main reason I want a unit of these guys - ever since seeing that design illustrated in "Warfare in the Classical World." Keep up the great work. BTW, you really have the Dip down. Dean

Great work. I know the feeling of horror after pulling figures out of the dip for the first time: Yes, the deep recesses are nice and dark, but there's that ultra-glossy candy coating look to them. It's easily fixed with Dullcote or antishine or whatever. Your figs look fantastic. I will have to start a blog about my emerging armies, once I get a decent camera. I have about 200 Gauls and 200 early Imperial Romans.