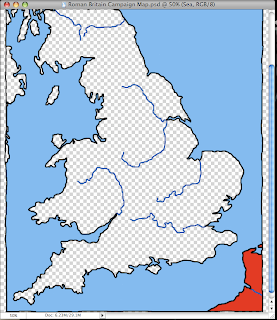 Just a quick update to show the map so far. As you can see, the sea has been completely coloured in. The next stages are to colour in the land and divide it up amongst the tribes and also to add a key, title and any features such as existing towns to the map. After that, I'll try and write down some of the rules and perhaps post them on here.
Thanks again for the interest!
Posted by Consul at 10:58 pm 2 comments: 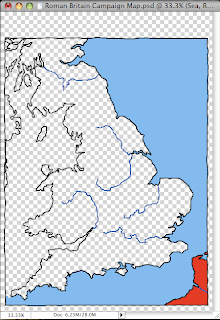 Just a quick update on how the campaign map and rules are going. The picture above shows my progress with the map on Photoshop (I've been colouring in the sea hence the seemingly slow progress!). I've also marked out the major rivers and you can just see Gaul in the bottom right of the picture (coloured red, marking it as Roman territory).
I'm currently deciding whether or not to try and divide Britain into provinces or regions. In the previous post, I mentioned I was adapting a game meant for raiding Vikings along the Eastern coast of England and that didn't use or need the country to be divided up. But i'll have to do a trial run.
In the game, you also have the option of building roads, towns, ports and various forts and defences to guard your land which are all marked on the map in turn.
I'll probably work on this again this evening and may do a post either tonight or tomorrow. Thoughts and suggestions welcome!
Posted by Consul at 10:02 am 4 comments: