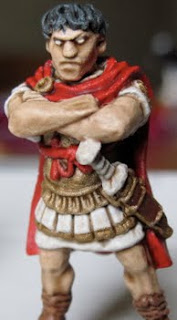 Quintus began his career as a Quaestor in Rome but his talent for management and financial acumen was soon recognised and saw him reassigned to Spain where he would oversee the development of this new and prosperous land. Quintus spent much of the day studying his charts and writing letters to his superiors in Rome, detailing his progress. There was little time for fun and games.
Under his leadership Spain flourished. Towns sprung up across the country and new roads were built to connect them to the thriving coastal ports that fed the empire with food and tradable goods. Mines were constructed to extract valuable resources from the land and farms fed the burgeoning province. Not even the widest or fastest flowing river could stop his expansion, he simply bridged them and continued with his aggressive expansion. Of course, the locals didn't take too kindly to the loss of their land and rebelled, causing widespread damage to the new Roman infrastructure. This angered Quintus who had spent many months trying to Romanise these people and bring prosperity to the land. He raised an army and marched on the rebel camp, slaughtering all who defied Roman rule. You do not want to stand in the way of this man or you'll end up as part of his next project, probably as part of the mortar!
Posted by Consul at 2:24 pm No comments: 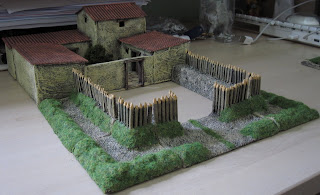 As mentioned in the previous post, I recently received a farm house from Paul Darnell of Touching History fame. I had an idea to eventually fortify the Roman/Greek farm for a future defense scenario and have had a go at this by using a wooden palisade wall with a ditch. I can't wait to use this on the gaming table! It looks great!
What do you think? Any comments or suggestions? The photo is fully clickable.
Posted by Consul at 5:28 pm 5 comments: 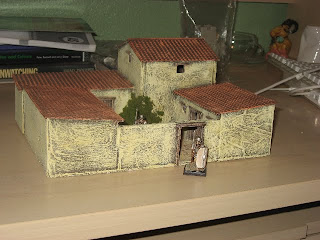 I received this rather marvelous model Roman/Greek farm in the week from Touching History's Paul Darnell. You can see it pictured above with two of my half-finished Romans for purposes of scale. They are both 28mm Foundry Caesarian Romans.
In time, I intend to add some removable barricades for a defense scenario I have in mind and add a vineyard and olive grove. The farm buildings represent only a quarter of its eventual size as I'm going to add another three terrain tiles the same size as this one to hold the olive grove, country lanes etc. It should become an awesome centerpiece of any battlefield!
I really like this building. Buildings of a similar style were scattered all over the mediterranean where the Greeks and Romans had any influence and so making it an incredibly versatile piece of scenery. I can use it across hundreds of years of warfare and in different locations around the mediterranean.
For more information on my Macedonian/Greek project, go to my other blog here.
Posted by Consul at 9:02 pm No comments: 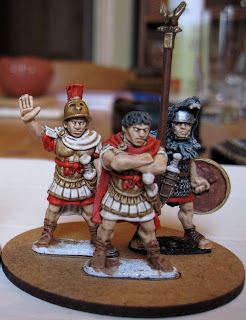 Here's a fully clickable photo of my first command stand. The figures have been painted and matte varnished and as you can see, this makes quite a difference. They still need basing material applying to the base but I want to order some static grass before I do this. I will have one of these command stands for every 1000 points I use.
Note: the standard bearer was painted entirely using the traditional multi-colour, layered shading method and not using the army painter (my first figure like this!). All my standard bearers will be painted like this. I did however ink the flesh.
Posted by Consul at 2:46 pm 5 comments: