Governor Barbula pays a visit to his generals

Governor Barbula first came to our attention on this blog in this post in October of last year and since then he's been a busy chap! His plan to march on Rome with his army of loyal followers and band of mercenaries has been picking up speed over the last few months and has just this morning been photographed visiting one of his generals at a training camp just outside the city walls. 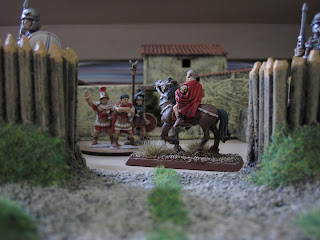 This can only mean one thing, his army is nearing completion and he is merely making the final preparations before he sets his plan in motion. It should be an interesting and testing few months for the Roman Empire...
Posted by Consul at 12:38 pm 5 comments: