Influenced by the latest post on BigRedBatCave, I thought it may be interesting to create a list of my current projects. I too am a bit of a period hopper but still don't have much to show for it!
Current projects - this is the year of the ancients!
Projects on hold - these are projects I have some figures for but am currently not working on
Future projects
I hope to have made considerable progress on my current projects by the end of the year and have at least two 1000 point, game-able armies available to play at game at Christmas (hopefully will have had a chance to work on some terrain too). I really need to sort these into short and longer term projects and then I can allocate my time a lot better.
If you didn't already know, I do a blog solely for the progress of my Greeks which you can find here. This will get updated much more frequently after Easter.
Posted by Consul at 11:38 am No comments: 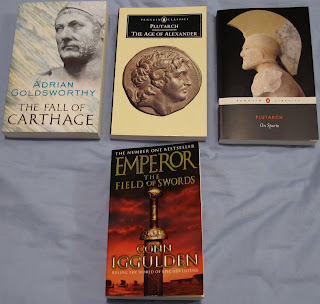 I'm currently reading the 3rd in the series of Emperor books by Conn Iggulden which are a great and exciting read! They are about the life of Caesar from a young boy until his death. Obviously the author has had to fill in the gaps where historical evidence is not present but he's done an excellent job of mixing history with adventure to create a thrilling read.
At the same time I'm reading The Fall of Carthage by Adrian Goldsworthy which has been recommended to me by every single blogger I've come across. I've only finished the introduction (started reading it last night) but it certainly looks interesting and I'm keen to find out a little more of the history and rise of Rome.
The other two books 'The Age of Alexander' and 'On Sparta' by Plutarch I am yet to come to. I've had a quick flick through them and they look very exciting and I'm keen to learn about the great figures of those time periods.

This is a WIP shot of the standard bearer for my command stand (I'm currently working on another 4 for my units and a Spartan command stand). I've already applied two layers of red to the undergarment and the colour is very steadily lightening. I will need to go over the flesh again with a darker colour and then re-do this colour as it's a black undercoat and you can still see it through the paint! Hopefully a more detailed progress report by the end of the week!
Posted by Consul at 2:58 pm 2 comments:

A while ago I thought of creating a unit of Batavian Auxiliaries after seeing this post on Iron Mitten. Secundus used Warlord Romans for his but on closer inspection of the figures, I decided they would look too out of place in my Caesarian army.
I emailed the guys at 1st Corps a little while ago to ask when they'd be posting up photos of their 'Slave Revolt' range and to my suprise, the following weekend they uploaded photos of the range! I found this pack of heavy infantry for the slave army that would look just right as Batavian Auxiliaries! Batavia is what is now modern day Netherlands and these warriors were renowned for their bravery and skill as fighters, hence why the Romans consistently recruited from the region. 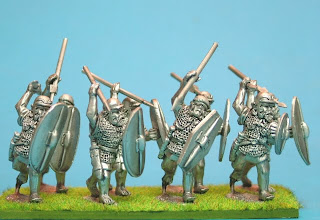 Picture from 1st Corps Slave Revolt range.
I love the fact they look very rough and ready with their beards and lack of sandles - perfect for a semi-barbaric unit. Plus they have the Gallic helmets the rest of my troops have. I wanted your opinion on whether to go for all hexagonal shields like the guy third from the left or all oval shields? Would a unit like this have uniform shields? Or be allowed celtic-style shields from their home province?
Painting update: I'm a bit frustrated at the minute trying to paint over black and silver undercoats - it's not easy! In fact, I'm having to paint darker shades of the same colour on before hand which is dramatically increasing my painting time. Slow progress ahoy...
P.S. this is my 50th post since April 2009. Hurrah!
Posted by Consul at 3:39 pm 4 comments:

I first posted this image of my Spanish cavalry some time ago but it wasn't clickable then (hopefully this one is!).

I bought them painted like this but intend to add more detail to them in time (as they're fully painted - this can wait!). They look a bit like Crusader miniatures but I can't really be sure. I bought them from Partizan in Newark and they were quite expensive at the time considering the quality of the paint work. The riders are poor but the horses are painted to a VERY high standard.
They're based three to a base (can't remember the measurements) but they don't really have enough depth. You can't have them move in a column as the horses touch, increasing the distance between bases which is a bit of a shame.
Make sure to check the blog tomorrow as I'll be needing your help and advice once again! This time, for the 'look' of some auxiliaries and the composition of my Roman army.
Posted by Consul at 12:46 pm 2 comments:

I've had a bit of a surge of followers and commenters in the last few weeks and I thought it'd be interesting to see just how many people are visiting my site. I've been monitoring website traffic on this site since Tuesday and have been astonished at the general number of people who've visited (nearly reaching the 200 mark in under a week!). I never thought I'd get this many. As you can see from the graph below, the number has been steadily increasing throughout the week.

The blue bar shows the amount of 'unique' visitors or people visiting the site from a certain IP address. This is most representative of the people visiting the site but the green bar shows the number of page loads. This means that a lot of those who visit are opening up my blog several times a day or looking all the way back through my posts to the older ones. I can't think why there's this steady increase in visitors but perhaps it has something to do with my increasing frequency of blog posts, that seems to help when blogs become popular!
So I'd just like to say a massive thanks to all those who've visited the site in the last week (and those who've visited in the past) and to all those who have elected to 'follow' the blog or leave a comment. It really means a lot to know there are people who find some form of entertainment in the blog. This will spur me on to paint A LOT more and try and get painted figures churning out much more frequently.
I was thinking of reducing the security surrounding comment posting on this blog as I've received a lot of very helpful and interesting comments lately and I may be missing out of some vital piece of advice from those who chose not to sign up. Do you think I should allow anonymous posters to post a comment? This would allow those who don't have an account to be involved. Good/bad idea?
Posted by Consul at 11:45 am 3 comments:

My painting total has increased to 3 since yesterday. I've painted a legionary unit leader and two of the figures to go on the General's command stand. They've turned out really well and I've managed to preserve a lot of the white on the capes etc. Haha, they sound like superheros now. Perhaps that should be 'cloaks'... 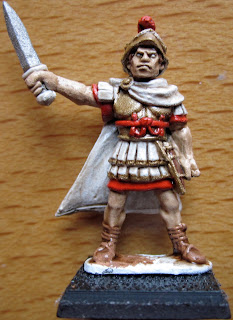 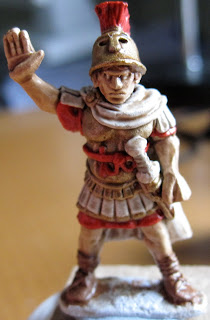 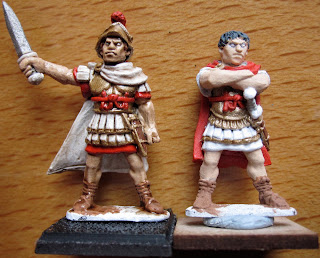 This is a shot to show you how the Army Painter changes the look of a figure. The figure on the right is my General character (he's since been touched up and dipped) who hasn't been dipped at this point and on the left is a character who has been dipped. You can see the effect it's had on the 'kilt', face and shoes quite clearly.
All these figures still need matte varnishing but I'll have to do that in a couple of months when I get home. This makes a huge difference and really adds to the quality.
I wouldn't expect to see anymore photos of these guys until their properly based and varnished but hopefully the command stand will make an attractive centerpiece for the army!
Cheers!
Posted by Consul at 2:36 pm 1 comment:

Painting total in the last 2 weeks

...1
But I have many more nearly finished so hopefully that number will shoot up by the end of the weekend.
Posted by Consul at 1:54 pm 6 comments:

The face of 'Consul'.

As I've been blogging for some time now and have built up quite an online presence (pestering long-time bloggers for help!), I thought it rude that those who take the time and effort to read my blog and leave me encouraging comments do not know who they're talking to!
Well, below you'll see a picture of my Dad, Richard, and I who form possibly the smallest wargames group in Britain - the Mill Road Militia! We have been mistaken for brothers in the past but I am on the one on the left. We haven't played many games recently but did used to play a lot of WWII and Napoleonic games, my Dad always having to play as the 'Fatherland' (Germany and France!). Hopefully with the coming of my new ancients armies then the fights will continue and we'll be able to post up a few interesting battle reports. 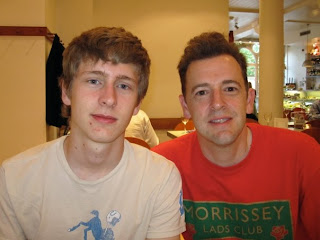 My Dad started off playing role-playing games such as Rune Quest and Traveller but eventually moved on to tabletop wargaming. His period interests are classical ancients (Alexander), the Dark Ages (Normans, Saxons, Vikings), English Civil War, Jacobite Rebellion, Napoleonic and WWII. He also loves a good Vietnam game. He has figures for most of these periods in 6mm but we have 1/72 (20mm) plastic Napoleonics he spent years painting when I was little all in boxes up in the roof!
My interest in wargaming obviously comes from my Dad and the fact we had a lot of figures, Osprey books and rule books lying about the house was certainly a help! I also loved war films - Zulu being my favourite at the time. Honestly - I watched it everyday for about 2 years when I was in infant school and could quote every line (and sing Men of Harlech!)
I always thought the Zulu chanting was rather exciting and beautiful in a way. But anyway, that
video shows the exchange of chants/songs before the final battle in the film. It's all rather epic.
My main wargaming interests are ancients obviously with an emphasis on Romans and Greeks,
AWI and WWII.
I hope that gives a little insight into the background behind the blog and my interest in wargaming!
I hope you aren't too offended by my ugly mug ;-)
Posted by Consul at 10:48 pm 8 comments: