I painted the rest of the wolf skins last night whilst watching the second part of Silent Witness and the first two episodes Secret Diary of a Call Girl on my laptop (yes it really did take me that long). I think they look pretty good and I can't wait to get them finished and out of the way so I can go back to line infantry. I have a unit of wolf-skinned skirmishers yet to paint in a box at home which were meant to be in the 'starting line-up' of my army but a fear of the wolf skin put me off! Now I'm much more confident, I should be able to finish them pretty quickly and have a unit that looks great on the battlefield! It was inspired by this unit that Secundus created over at Iron Mitten. Those figures are from Renegade. 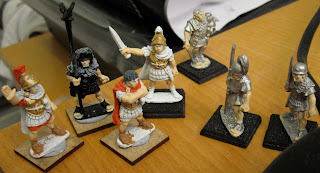 This is what I'm working on today. The three figures to the left make up the General's command stand - not sure what he's called yet though. I had a crisis of confidence over the naming of my characters last night so that's all changed! I wont post anymore photos of these guys until they're varnished and based so they really make an impact on the blog. Next along are the two leaders of my other two legionary units. And then the next two figures are the 4th figure that make up the front line of each Legionary cohort (4x4). I'm painting these are a test figure for the unit, shields and all. The un-armoured unit will have a mixture of coloured tunics and patterned shields to make them look much more like a hastily raised unit.
Hope you enjoy! I'm trying to get as much done on these today as possible but an afternoon in the pub watching the Arsenal game may stop my ambitions in their tracks.
Posted by Consul at 10:46 am

1-3. Ouch. Hope it didn't affect your painting plans, as your figures are really coming on.

I managed to do a bit more painting before I left - just about finished the command stand figures. Got to do some touching up and then apply the dip but they're getting there.

I forgot how hard it is applying paint over black and silver undercoats - it's a nightmare! It also doesn't help that I undercoated the tunic-wearing legionaries silver instead of white! D'oh! But it's good to be able to see what i've got to go and be able tp picture myself finishing, although that wont be for another 2 months or so! I can't wait to get start on their enemies!