I thought I'd give you a little look at the army in its entirety. The units represent 998 points in WAB terms and as you will see, only one unit is nearing completion! Each photo is clickable and annotated underneath. Comments and feedback welcome! 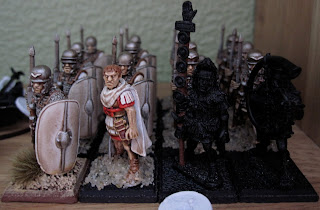 This is the unit led by the Tribune Gaius Sempronius. The legionaries are finished but just need their bases sorting out and their wolf skin-clad standard and musician painting. The figure on the left of the front row gives an example of what a completed miniature would look like (not all will have tufts on their bases). 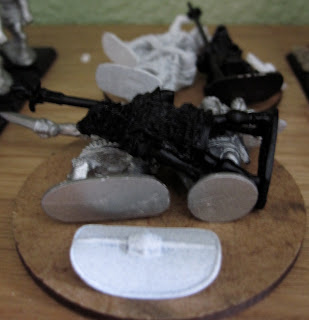 These are the two command stands but only one will be used for this Vexillation (1000pt army). They need individually mounting, ready for painting. 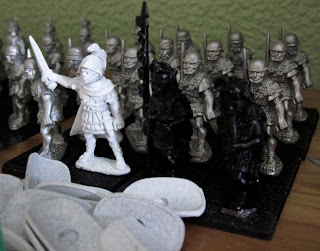 This is my second cohort, led by Centurion Spurius Maximus and that pile in front of them are their shields. 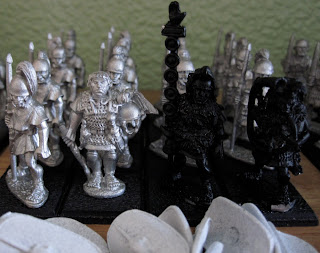 This is the third cohort which represents a newly raised, un-armoured unit led by ex-gladiator trainer Lucius Murena (he's a bit of a brute). 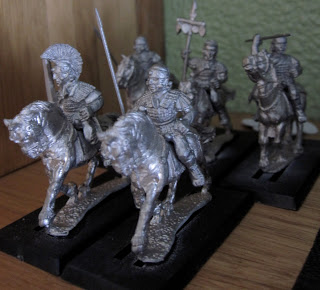 This is my unit of horse led by L. Aemilius Paullus. They aren't glued to the horses yet and will only be properly mounted once both horse and rider are painted (I've found a fellow blogger who has kindly offered to paint the horses for me! Hurrah!)
The army looks quite impressive in my not-so-impressive display cabinet (i'll post a picture of it in another post) and I'm looking forward to seeing it complete and on the table although I have another distraction to fight!
In December's issue of Wargames Illustrated I read an article on the American War of Independence and my Dad and myself decided to buy some Perry Continental infantry and militia as a start with a view to building both a British and an American army. This will be a slowly progressing, long-term project which will only be added to once current figures are painted! Below are some progress shots. Please note, they are only WIPs and I tend to just hastily block in the colour, not worrying about overlap of colours as I go back later and ensure perfect colour joins before using the AP. I will be trying a new technique following Saxon Dog's blog which is where you highlight you miniature AFTER applying the AP which is supposed to make them look even better, especially is the miniature has lots of whites. 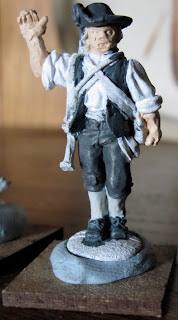 Still plenty to do on this one!
Posted by Consul at 1:24 pm

Your paint work on those Romans is excellent. I am intrigued by the bases - are they commercially available ones and if so where did you get them?

Thank you for your comment! They are commercially available. They are Gale Force 9, sold by Warlord Games. I can't find them on their website anymore but this is where they would be.

MDF bases are just as good (and ALOT cheaper!)